Before and After Rhinoplasty Photos

Rhinoplasty for a Teenager 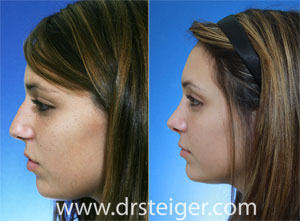 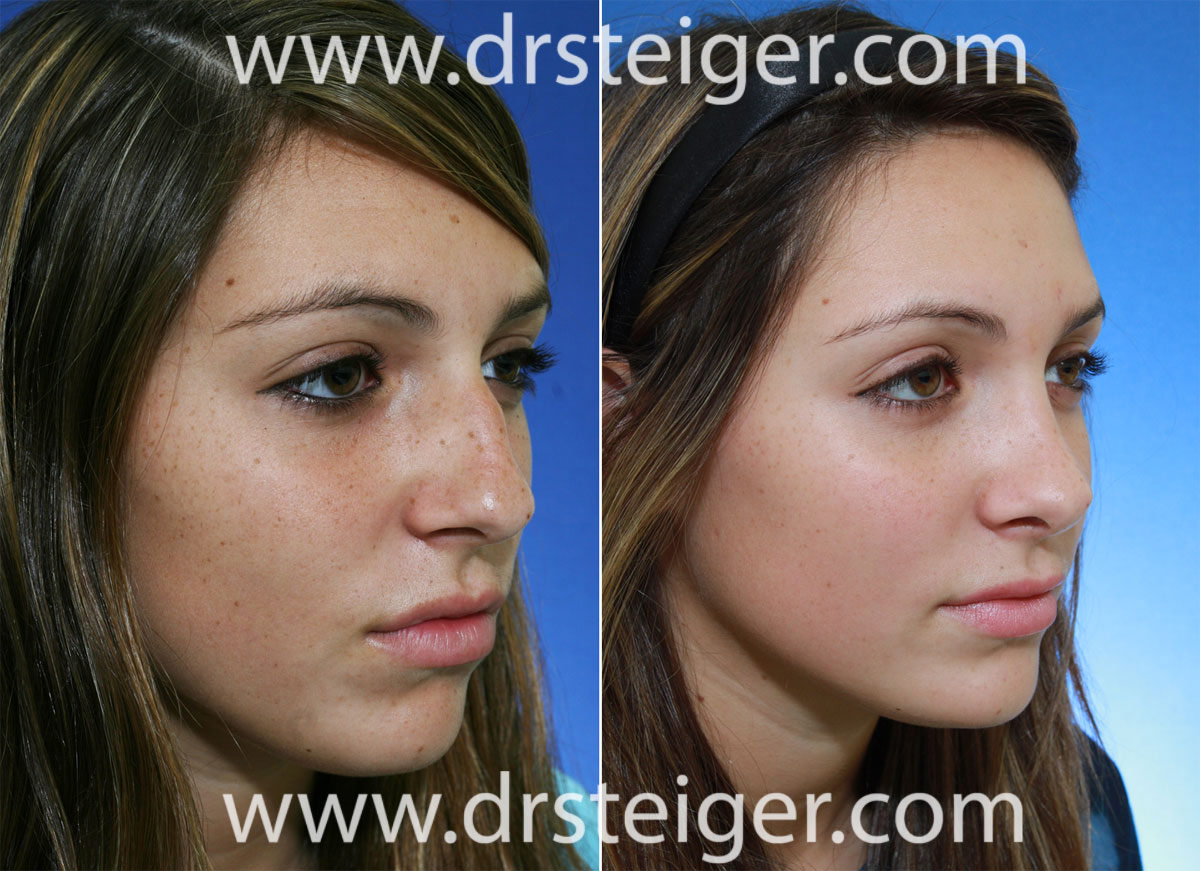 Goals: Rhinoplasty (nose job) was performed on this teenage girl in order to improve the appearance of her nose. Her nasal hump was corrected along with improvement in the appearance of the tip of her nose by lifting the nose and narrowing a wide tip. 6 months after her surgery she is seen with a more attractive appearance to her nose that fits her face and has a natural appearance.

Rhinoplasty for a Nasal Hump and Crooked Nose 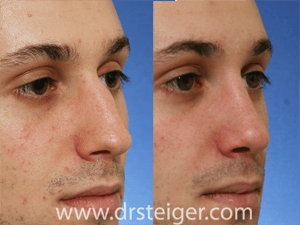 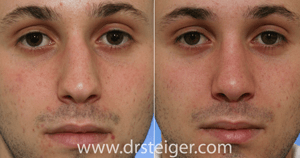 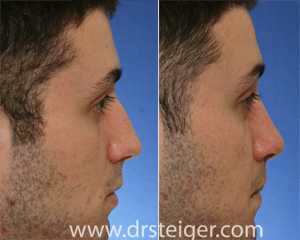 Goals: Correction of nasal hump, straightening of a crooked nose, balanced rhinoplasty with radix augmentation (to maintain a natural appearance). A deviated septum was also repaired.

Rhinoplasty for a Nasal Hump and Tip Refinement 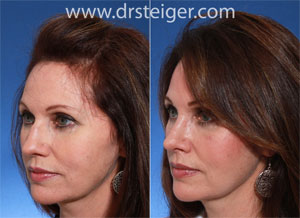 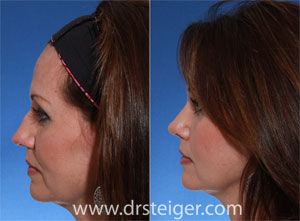 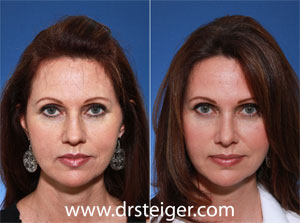 Goals: Rhinoplasty was performed on this female in order to reduce a nasal hump and refine the tip. A natrual and feminine appearance to the nose was achieved by lowering the nasal hump along with the radix. The tip was narrowed, rotated and slightly more collumelar show was created in order to obtain a balanced, natrual and attractive result. 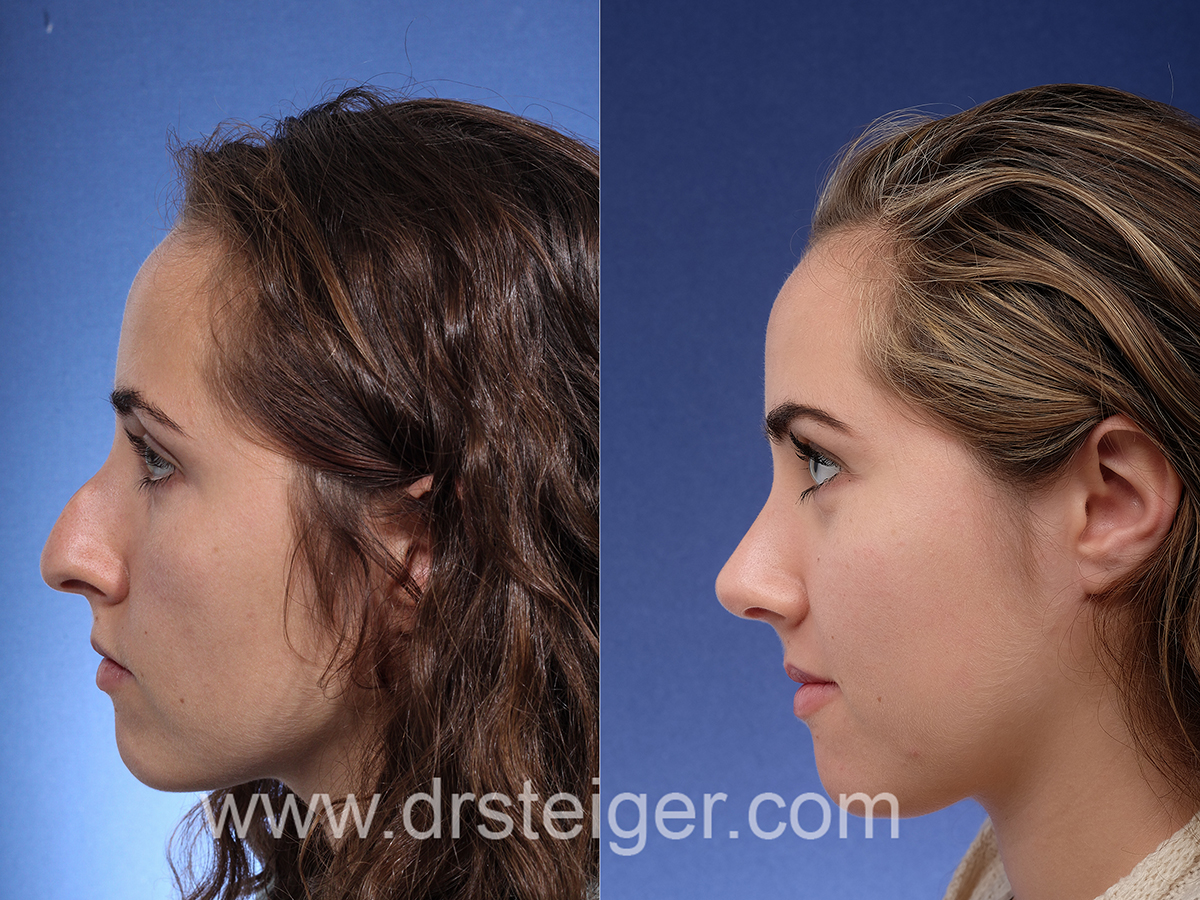 Rhinoplasty for a Drooping Tip and Nasal Refinement 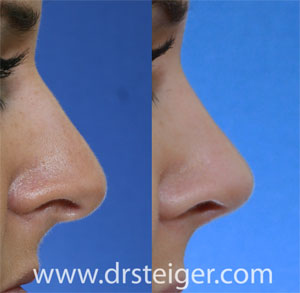 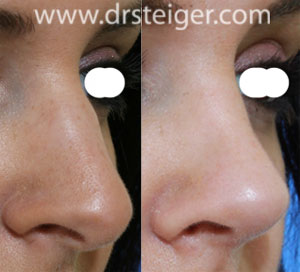 Rhinoplasty to Lift the Nasal Tip and Reduce a Nasal Hump 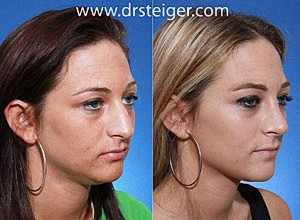 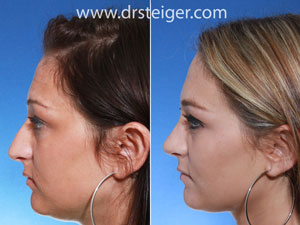 Rhinoplasty for a Wide Nose 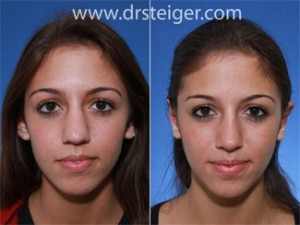 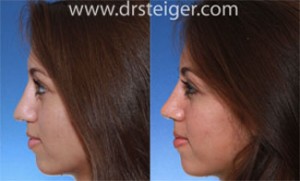 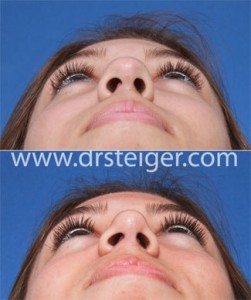 Goals: Rhinoplasty was performed to narrow a wide nose in a female with a wide dorsum and bulbous nasal tip. The nasal dorsum (both bone and cartilage) as well as the tip cartilages were narrowed. After rhinoplasty surgery the nose is narrower along the entire dorsum and tip. The nasal tip is elevated on profile view with slighlty increased supra-tip break. All together this achieved her goals of a smaller, refined, feminine, and natural appearing nose. 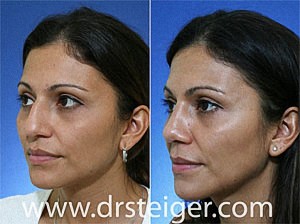 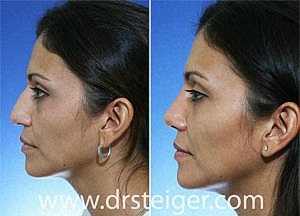 Goals: This is a hispanic patient who had rhinoplasty to improve the appearance of her nose and who wanted to maintain a natural appearance. In addition to reducing a large hump, tip-plasty was performed to lift the tip of her nose and narrow a rounded nasal tip. Before and after photos are seen here. 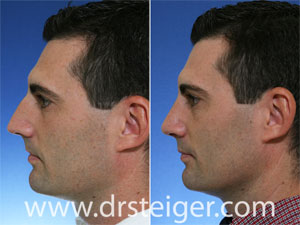 Goals: This patient had a septoplasty in order to correct a severely deviated septum that occured from trauma to his nose as a teenager. Rhinoplasty was combined with this (called a septorhinoplasty) in order to change the appearance of his nose. The bridge of his nose was reduced while maintaining a strong masculine appearance to his nasal dorsum. His tip was also altered in order to achieve more nostril show (also known as collumelar show) from the side view. Dr. Steiger’s advanced rhinoplasty techniques are aimed at achieving an ideal nose for each of his patients.

Rhinoplasty in Woman for a Drooping Tip and Nasal Hump 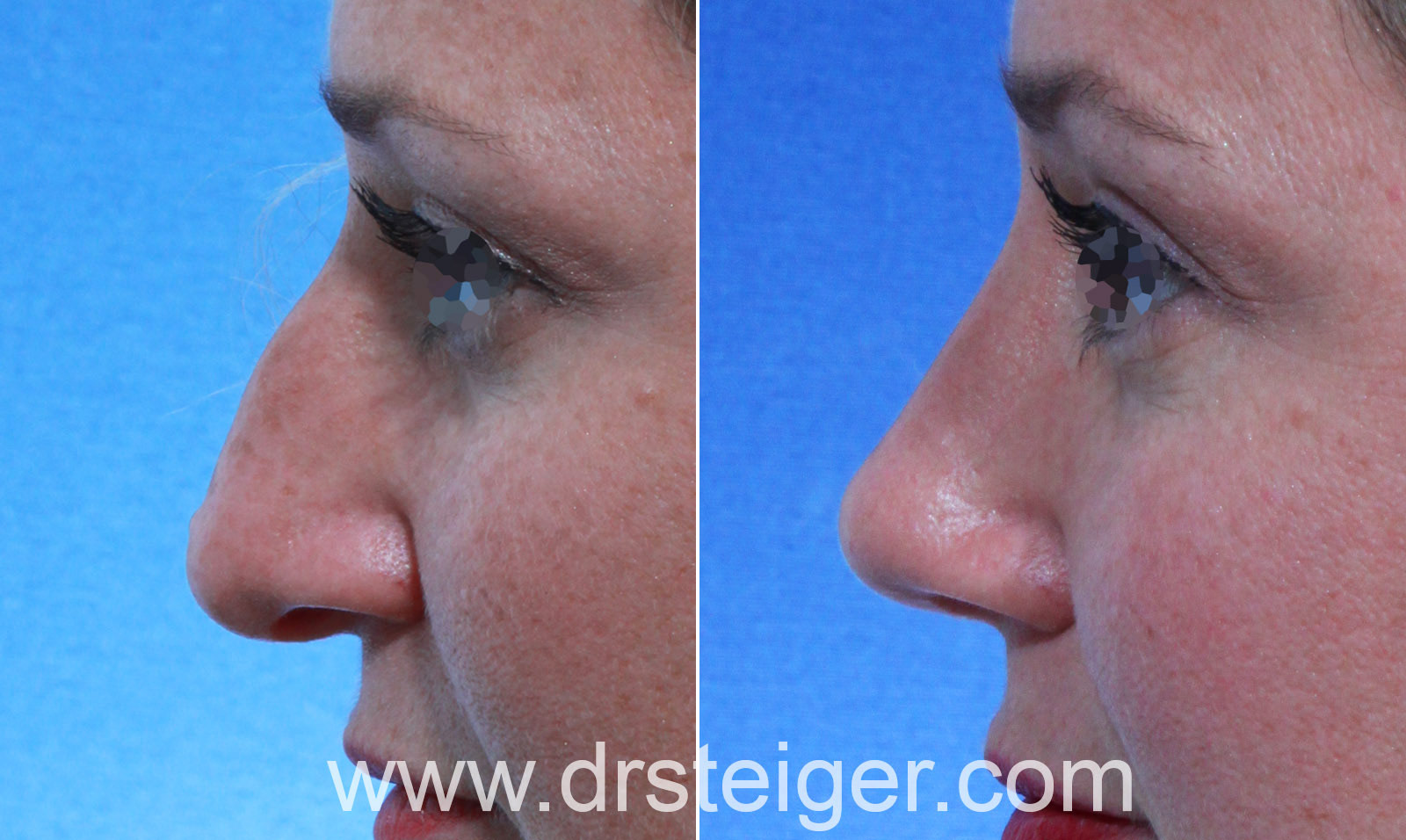 Goals: This woman had a balanced Rhinoplasty performed to reduce the length of her nose, lift her drooping nasal tip, and bring down a nasal bump. Dr. Steiger focused on giving her a natural result that fits the overall shape of her face.

Rhinoplasty for a Drooping Nose 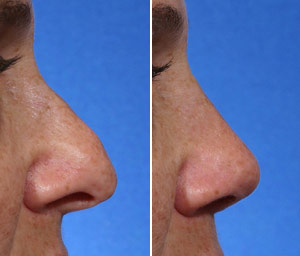 Goals: Correction of a long nose, nasal hump (hook nose), and rotation of the nasal tip 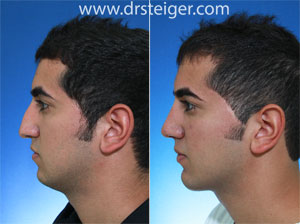 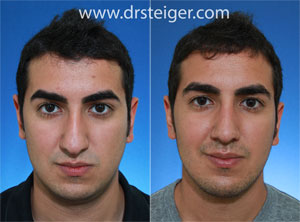 Goals: Reduction of the nasal hump, refine and lift the nasal tip, shorten the nose, and improve the balance between the face and nose with a chin implant.

Rhinoplasty for a Drooping Nasal Tip, Hook Nose and a Nasal Hump 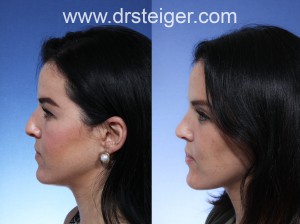 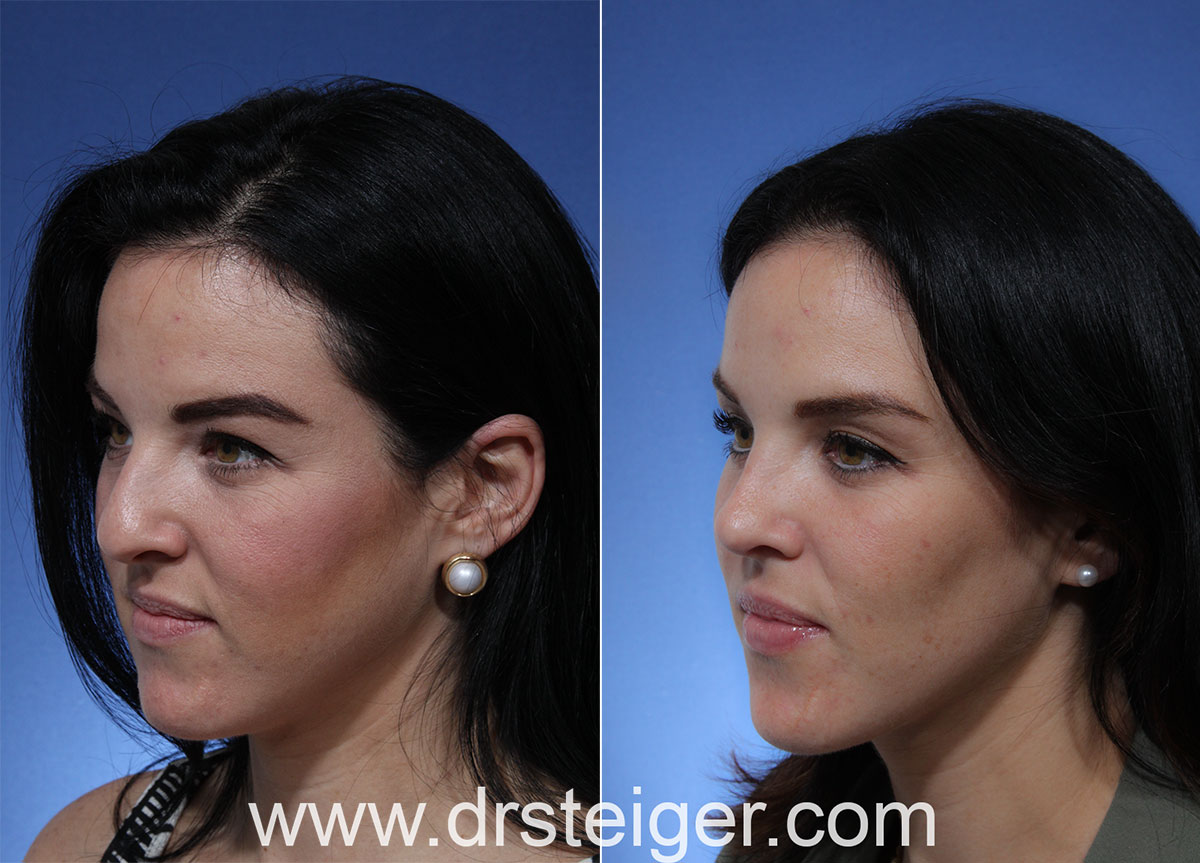 Goals: Reduce the nasal hump and the hook appearance to the nose.  Lift and support the nasal tip.

Rhinoplasty with Chin Implant in a Man 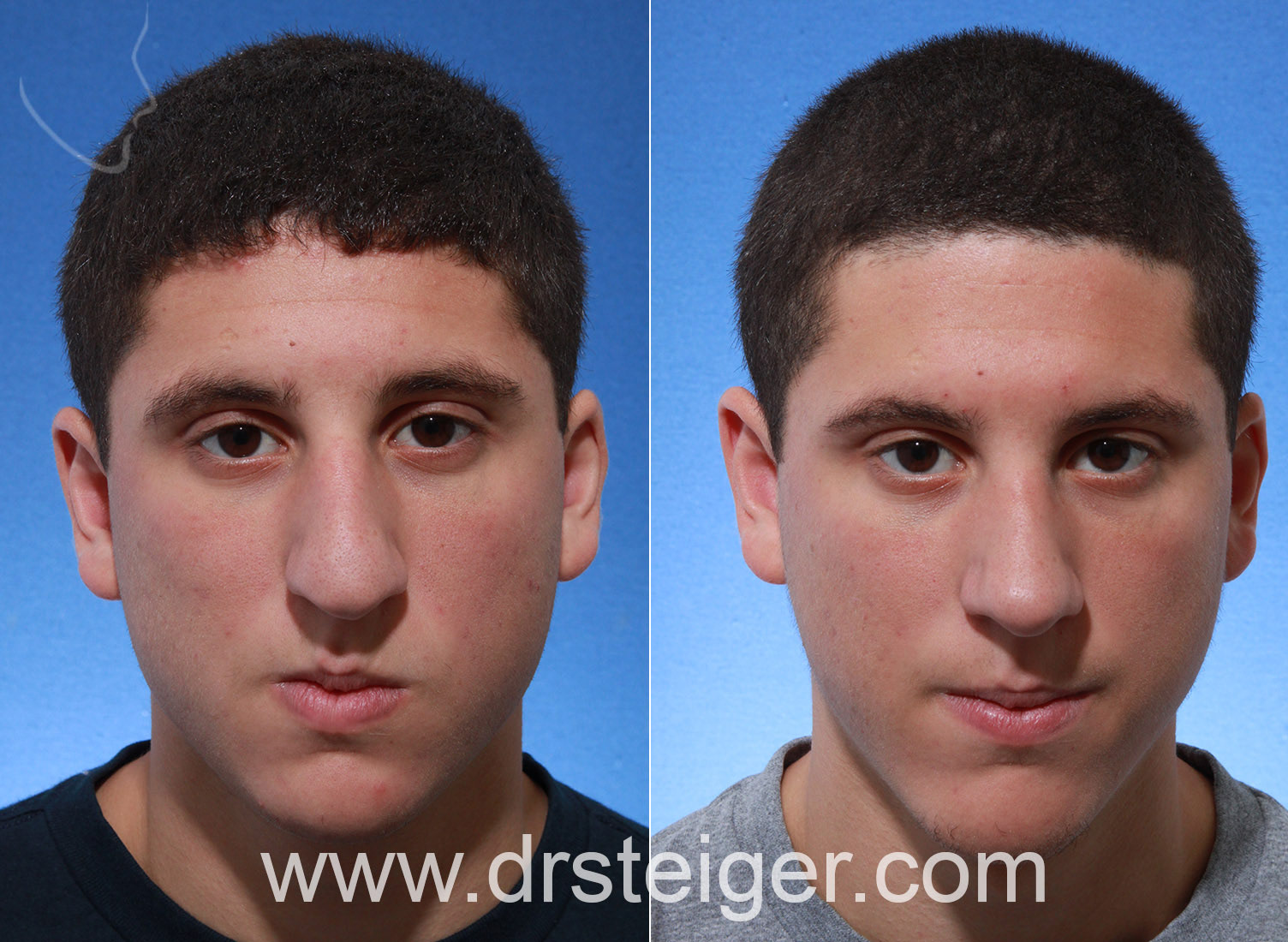 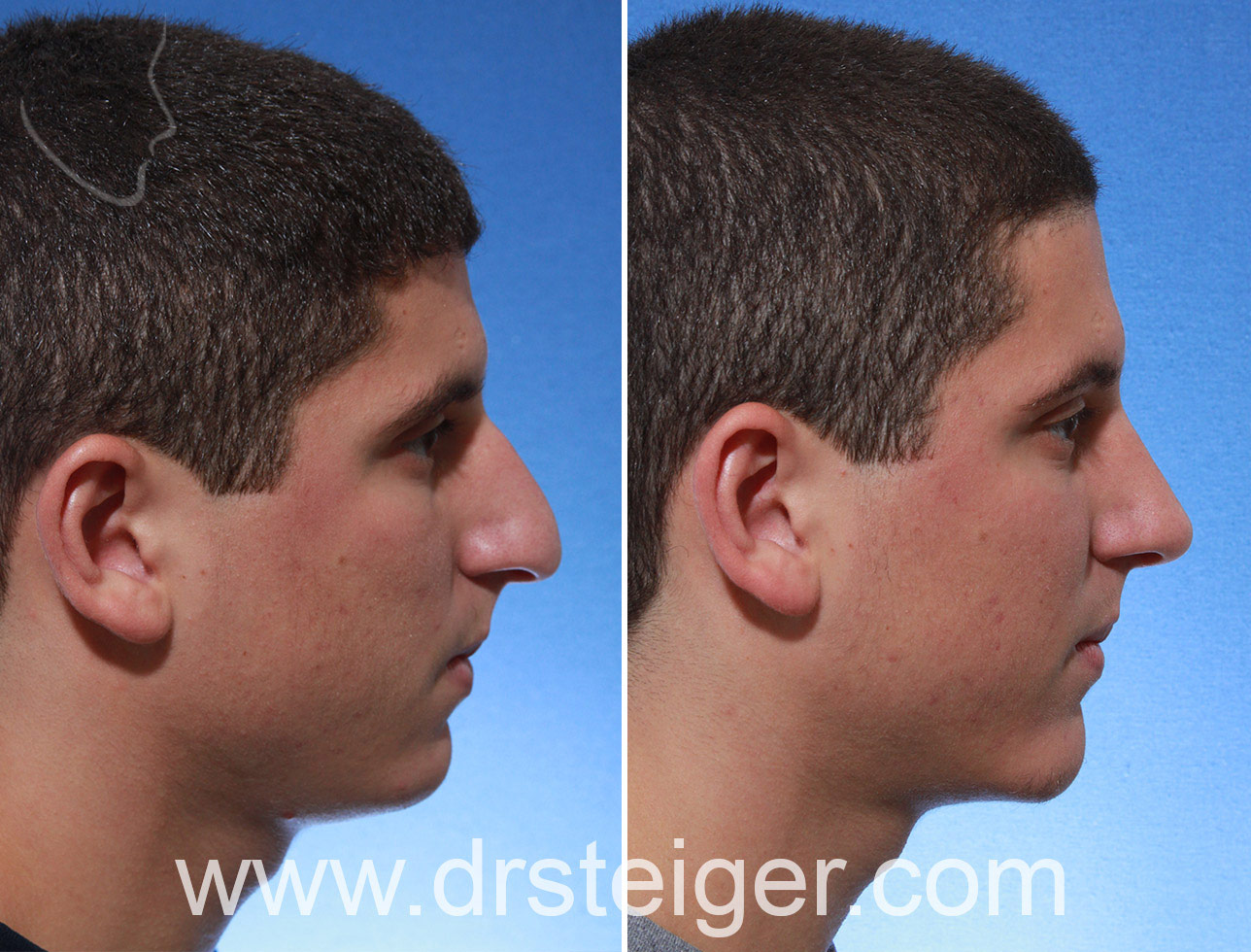 Goals: A rhinoplasty and chin implant was performed on this teenage man to correct a hooked nose with a nasal bump and lift a droopy nasal tip.  He is seen here 1.5 years after rhinoplasty surgery with a natural looking nose that fits hise face. A chin implant was also placed to balance his profile.

Rhinoplasty for a Nasal Hump 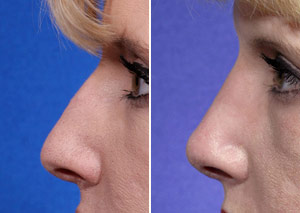 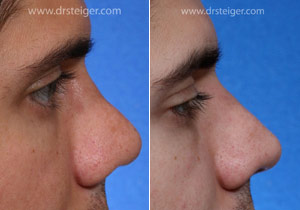 Goals: This patient had a broken nose that resulted in partial collapse of his nose. The saddle (collapsed) nose was corrected, his short nose was lenghthened, and a masculine appearance was restored to the nose. At the same time a septoplasty was performed to repair a deviated septum, and cartilage grafts were used from the septum to repair his nose.

Rhinoplasty for a Hook Nose 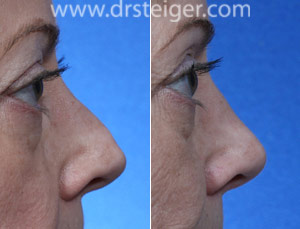 Goals: Reduction of the nasal bridge, define and refine the tip, creation of a supratip break

These are all before and after photos of Rhinoplasty surgery performed by Dr. Steiger.  Dr. Jacob D Steiger MD is a South Florida Rhinoplasty specialist board certified by the American Board of Facial Plastic and Reconstructive Surgery and the American Board of Otolaryngology- Head & Neck Surgery. He practices in Boca Raton and Delray Beach, Florida treating patients from Palm Beach, Ft. Lauderdale, Miami, as well as patients from all over the US and from around the world.

See More Rhinoplasty Before & After Photos