Nuances of Profile Management- The Radix

Analysis of the Nasal Profile 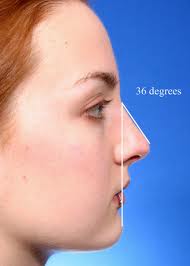 Important angles to consider when assessing the nasal profile include the nasofacial, nasofrontal, and the nasolabial angles. The nasofacial angle defines nasal projection from the face. It is formed by the intersection of two lines. One line is drawn from the nasion to the pronasalae (tip defining point) and another line is drawn from the nasion to the pogonion.3 (Fig. 2). The angle formed by these two lines is ideally 36 degrees. A more acute angle bestows the appearance of increased nasal length, while more obtuse angles contribute to the appearance of a shorter, more projected nose. The nasofrontal angle is the obtuse angle between a line tangent to the glabella and a line tangent to the pronasalae, with both lines originating at the nasion. This angle is ideally between 115-135 degrees (Fig. 3). The nasolabial angle is the angle formed between the plane of the columella and upper lip as seen on profile. Ideally, it measures between 105-115 degrees in females and 90-105 degrees in males.

Nasal length is the distance from the nasion to the nasal tip, which ideally is between 45mm-49mm.1 Numerous methods of estimating the ideal length have been described. Byrd suggests that ideal nasal length should equal two-thirds the height of the midface, as measured from the glabella to the subnasale.1 Other methods of determining length involve ratios that describe the ideal nasal shape. These ratios involve the relation between nasal length, height, tip projection, and angulation. Crumley states that the ideal nasal profile forms a 3:4:5 right triangle.3 Goode’s method calls for a ratio of .55-.60 between tip projection and nasal length (Fig. 4).4 Both methods mathematically infer a nasofacial angle of approximately 36 degrees. Although there is no substitute for the aesthetic eye, the aforementioned measurements, ratios and angles serve as guidelines towards surgical planning. 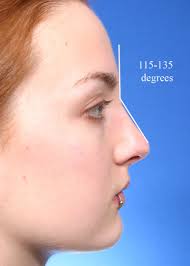 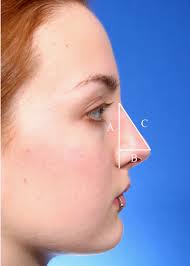 Figure 4: Nasal Proportions- Crumley’s 3:4:5, right triangle of ideal nasal proportion. This triangle is formed by the vertical tangent between the nasion and alar facial sulcus (A), a perpendicular line from this tangent to the tip defining point (B), and the dorsal line (C). B:A:C should approximate a 3:4:5 ratio. Goode’s method for evaluating appropriate projection, relates tip projection to nasal length. The ratio of B:C should approximate .55-.60.